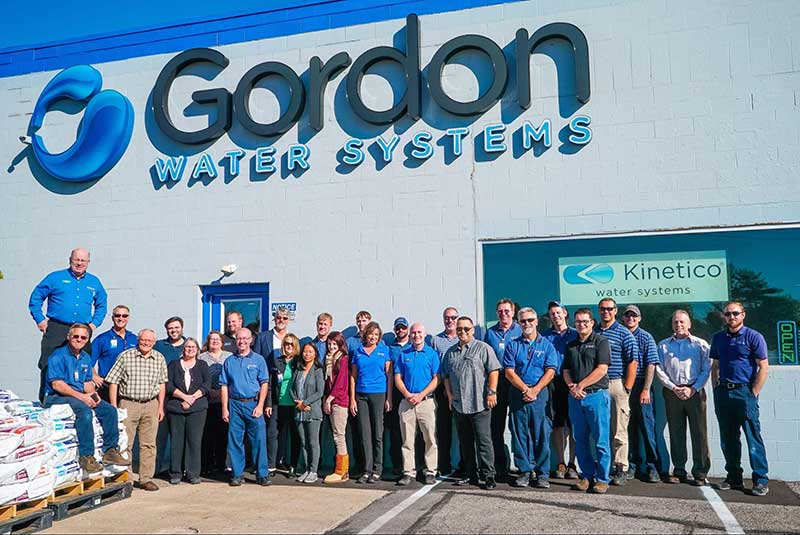 Gordon Water Systems can trace its origins as one of West Michigan’s leading water conditioning companies back to 1973 as Duisterhof’s Soft Water. But nobody could spell it correctly on checks, so Mr. Duisterhof made a simple change to his first name.

Gordon began his career as a Lindsay Water Softener Dealer out of his house. Realizing he needed more space, Gordon rented space in a small old lumberyard served as the office, warehouse, and showroom. Having his wife and children around, he also needed it to host decorative painting lessons plus space for his kids to work and play.

The city of Kalamazoo came calling for the building in 1979, so Gordon had to purchase a new building – a dry cleaning business on the corner of Walter & Vine.

The new space quickly started serving as a showroom, warehouse, and cabinet business rental unit. Oh, and our first bottled water production plant. It was in that building that Gordon was asked by the Lindsay corporation, “Do you want to keep selling Lindsays or Kinetico?” His reply was, “Thank you. I will sell Non-Electric Kineticos.”

His son and now President of Gordon Water, Steve, joined the company in 1987.

We wanted to be one of the premier water conditioning companies in the state so expansion into the Grand Rapids & Holland markets came in 1998. Sales efforts, along with the purchase of Tulip City Water Service, made this a reality. We rented space on Michigan Street near Plymouth and ran bottled water trucks for Holland/Grand Rapids out of that location until the “S Curve” was torn out.

The early 2000s saw the addition of a building in Portage on 300 E Centre. It was a showroom, small warehouse, and comfortable location for customer pickup.

Our Founder(s), Gordon & Merlyn Duisterhof Died just six days apart in December of 2017. They started a company and left a legacy.

Their sons, Steve and Tom, are second generation owners, have great people they work with and love to help improve people’s quality of life by providing them with clean, safe water. The stated passion for Gordon Water Systems is to “Earn the privilege of our customers’ recommendation.” All of us at Gordon Water Systems work to do that every day.

We proudly serve over 13 counties in West Michigan and have four convenient office locations located in Grand Rapids, Kalamazoo, Portage and Rockford.